The Evolution of Office Design

By Jack Eustace6th May 2020 No Comments 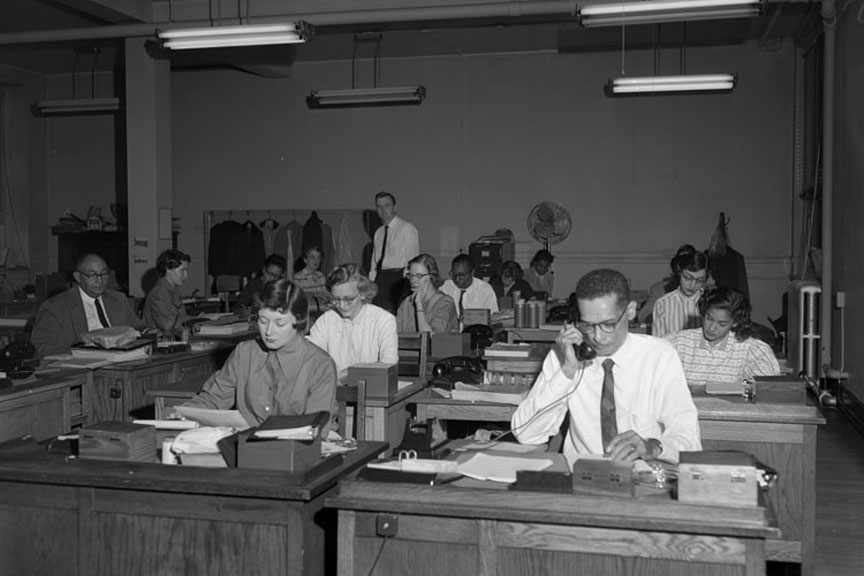 There is no denying that coronavirus has had a huge impact on working life. According to the Office of National Statistics, only 30% of UK employees worked from home during 2019; figures which have since shot up due to the current COVID-19 pandemic.

As employees settle into their new regime, talk has now turned to office design. Many companies are now reviewing their workspaces – some for the first time – to see how spaces can be adapted for better personal space and hygiene.

From cubicles and cramped desks to open plan spaces, this is not the first time office design has evolved, and it certainly won’t be the last. In this blog, Paragon Carpet Tiles explores how office spaces have evolved over the years, and what the future of the workplace may look like.

The 1950s saw the adoption of offices which encouraged a large degree of communication and interaction. The concept was known as Burolandschaft, which literally means ‘office landscape’. The focus was on the needs of workers, which meant design became a lot more flexible and rigid layouts redundant. This enabled teams across the company to sit and work together in a collaborative manner. The Burolandschaft concept is still talked about today and is often credited for its principles, which are said to have influenced modern office design.

Where to begin with the dreaded cubicle farm. Bosses became driven by profitability in the 1980s, which saw working conditions become cramped and busy as companies tried to fit as many employees as they could under one roof. This led to a concept known as ‘Cubicle Farm’ with the installation of cheap modular walls which created an environment which resembled that of a farmyard pen.

Thankfully, the 20th century started a new generation of office space design, which was very different from the bleak cubicle farm. Advancements in technology allowed for more agile working structures and employees no longer had to be bound to their desks. Hot desking became popular, which enabled employees to pick where they wanted to work. Interior design became more about aesthetics, as companies looked to create a space that was not only functional but looked great, too.

If you would have asked us at the start of this year about the future of office design, our answer would’ve been entirely different. The rise of the coronavirus pandemic has caused people to rethink and adapt their open floor plans to adhere to social distancing measures. Whilst co-working spaces are likely to remain important, how these operate will need to change to allow for more space and flexibility. Many experts hope that employers will invest in renovations to make offices healthier for their staff.

If you’re looking to renovate your office space, please don’t hesitate to get in touch with Paragon Carpet Tiles. You can contact your local area manager here: https://www.paragon-carpets.co.uk/sales-team/